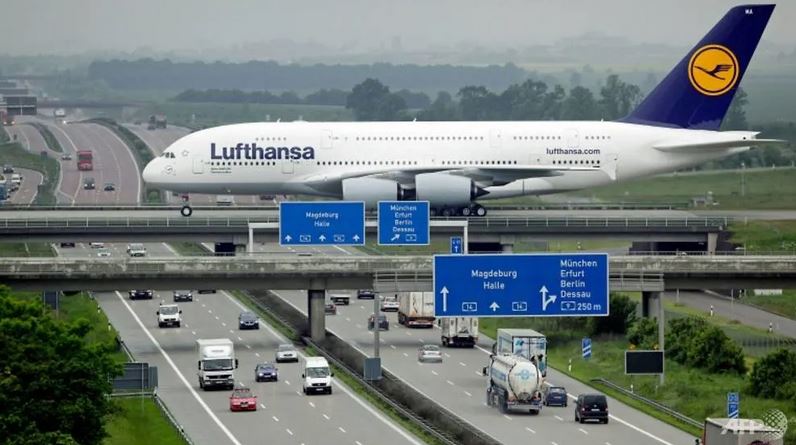 German flag carrier Lufthansa said on Thursday (Mar 4) that it lost a record €6.7 billion (US$8.1 billion) in 2020, as the COVID-19 pandemic wiped out demand for travel and left aircraft grounded.

Europe's biggest airline said it expects to book an operating loss again in 2021, although smaller than last year, as capacity runs at only 40 to 50 per cent of pre-pandemic levels for the full year.

Underlining the long road to recovery, it added that capacity will climb to 90 per cent of 2019's level only in "the middle of the decade".

After borders slammed shut as governments scrambled to halt the first wave of the COVID-19 crisis, the airline faced an uncertain future.

In June, it was offered a lifeline by the German government, which pumped in €9 billion for a 25 per cent stake.

"The past year was the most challenging in the history of our company - for our customers, our employees and our shareholders," said Lufthansa chief executive Carsten Spohr.

In the airline's home base, demand is sluggish with work from home orders curtailing lucrative business travel while official warnings are in place against leisure tourism in many countries worldwide.

Across Europe, restrictions are also in place as governments continue to battle rising infection numbers.

Lufthansa is currently flying about 20 per cent of its capacity, with little improvement expected in the next one to two months.

But it expects demand to pick up again in the summer with a vaccination roll-out progressing and more capacity for tests available.

Lufthansa, which includes subsidiaries Swiss, Austrian, Brussels Airlines and Eurowings, operated only 31 per cent of its overall capacity last year.

The operating loss came in at €5.5 billion, while a year ago, the airline's comparative adjusted earnings before interest and tax stood in the black at €2 billion.

Although it has put much of its staff on curtailed hours and brought its headcount down from a pre-pandemic 141,000 to 110,000 currently, another 10,000 jobs are still on the line.

Over the last months, it has done deals with unions representing pilots and ground crew so as to head off forced redundancies until March 2022.

Pilots agreed to short-hour arrangements and corresponding salary cuts while ground staff signed on to giving up bonuses and pay raises to save their jobs.

Lufthansa's woes mirror those of its competitors elsewhere.

IATA now estimates that traffic will reach between 33 and 38 per cent of the levels recorded in 2019.

Its previous 2021 forecast was for traffic to reach 51 per cent of the levels seen before the COVID-19 pandemic struck.