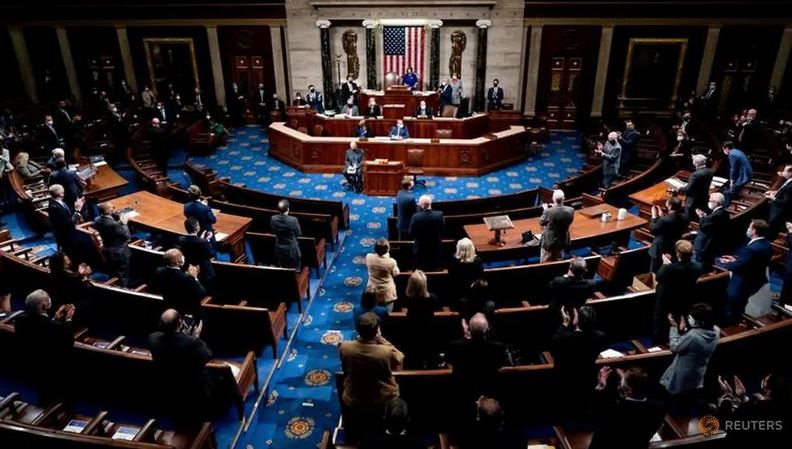 FILE PHOTO: A general view as the 117th Congress convenes at the House Chamber at the US Capitol in Washington, DC. (Tasos Katopodis/Pool via Reuters)
LONDON - Financial Times

Commentary: Why the Republican party will be hard to rescue?

It was a Republican, Vice President Mike Pence, who most exercised the crowd in the US Capitol last week. It was another, Senator Lindsey Graham, who found himself encircled and jeered in a local airport.

Neither man’s unctuous service to Donald Trump over four years counted for much once they chose to uphold his presidential election loss of last November. For that lapse in purity they will now be hounded, to quote one marcher, “forever”.

A feature of extremism is the relish with which it attacks its own side. The doubter and the schismatic incur more wrath than the outright non-believer. And so mainstream Republicans are in for a vicious and open-ended struggle with the wilder edges of their own movement.

If only the Grand Old Party were at stake, the nation could leave them to it. But no democracy can prosper long without two responsible parties. It is of existential import to the US (and to the world it helps to anchor) that Republican moderates prevail.

How tragic, then, that they probably won’t.

Their first problem is the depth and age of the internal rot. Republicans have to undo decades of flirtation with paranoid elements, not just five years’ worth.

Whether we date it to the congressional midterm election of 1994, or Barry Goldwater’s White House bid in 1964, or the McCarthyite 1950s, the party has not policed its right flank for a long time.

THE ROOTS OF THE REPUBLICAN SLIDE

The Republican portrayal of government as inherently malign is hardly new. Nor is the cheapness with which the American Revolution is invoked (both Richard Nixon and the former congressional leader Newt Gingrich did it).

The impugning of opponents’ legitimacy did not commence with president-elect Joe Biden’s this winter.

Few Republicans who connived at this style of politics expected it to morph out of control. But nor should they pretend it is a recent aberration, and that includes the otherwise-vindicated Never Trumpers.

The rich genre of commentary on whether there will be Trumpism after Mr Trump tends to gloss over the Trumpism before Mr Trump.

As well as this weight of history, Republican moderates are up against the structural vagaries of US politics. The system’s counter-majoritarian features allow the party to remain competitive and powerful without appealing far outside its base.

Having won the popular vote just once since 1988, Republicans have held the White House as often as not in that time. Wyoming’s 600,000 people cancel out California’s 40 million in the Senate.

Nothing here is improper. The constitution was never meant to privilege raw tonnage of votes. But it does mean Republicans do not face the same incentive — moderate or perish — that keeps parties honest in some other democracies.

To get anywhere, reform-minded Republicans must petition their colleagues’ consciences, not their interests. Even to write that sentence is to sigh at the hopelessness of the errand.

WHY THE US DIFFERS FROM OTHER DEMOCRACIES

Even if they did incur an electoral cost, strident conservatives have a lavish safety net beneath them. What distinguishes the US right from, say, the French or Australian kind, is that it is an industry, not just a political proposition.

A candidate might repel the broad mass of voters and still find lucrative work in cable news or the book circuit. Having flunked the 2008 election as a proto-populist running mate, Sarah Palin wrote memoirs that outsold Stephen King.

No other democracy has a large enough media market to sustain anything quite like this ecosystem. Even outgoing congressional members are incentivised to stay on good terms with the angry base. 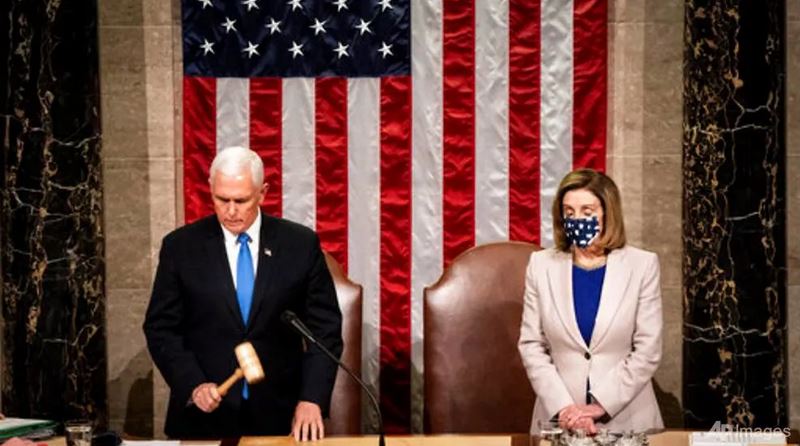 Speaker of the House Nancy Pelosi, D-Calif., and Vice President Mike Pence officiate as a joint session of the House and Senate reconvenes to confirm the Electoral College votes at the Capitol, Wednesday, Jan 6, 2021. (Erin Schaff/The New York Times via AP, Pool)

At every turn, then, the Republicans who wish to temper this wayward party encounter trouble. And they have tried before. There was a spurt of interest in change just over a decade ago.

Grand New Party, authored by Ross Douthat and Reihan Salam, sketched a new manifesto. The then Indiana governor Mitch Daniels stood out as a plausible messenger. What ensued instead was the Tea Party and, in time, Mr Trump.

The circumstances for renewal are even less promising now.

In an act of unsurpassable crassness, a former Trump aide is bemoaning the loss of social-media followers.

Those who wish to save the party of Lincoln and Eisenhower from this kind of thing must confront the logic of path-dependence. It is possible for an institution to be too compromised, for too long, to feasibly salvage.

If only the implications could be confined to the party, or even to the US.