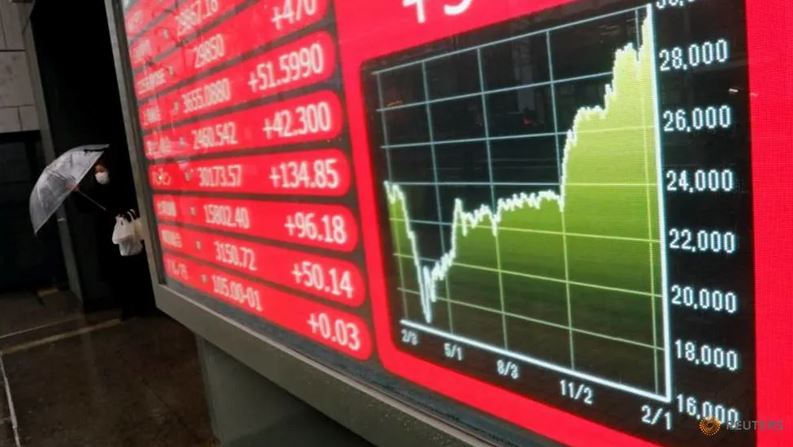 Asian shares edged higher on Wednesday as investors shrugged off concerns that stocks may have rallied too far too fast in the past year, and focused instead on optimism that more imminent U.S. stimulus will energise the global economic recovery.

MSCI's broadest index of Asia-Pacific shares outside Japan was up 0.44per cent. Australian shares were up 0.62per cent, while Japan's Nikkei stock index rose only 0.03per cent. Shares in China gained 0.63per cent.

Wall Street had retreated overnight after beginning March with a bang, with the S&P 500 staging its best one-day rally in nine months on Monday.

But some analysts warned that worries that stock prices may be frothy, a fear echoed by a top Chinese regulatory official on Tuesday, may make it harder for equity markets to hang on to gains. Fears that last week's sell-off in U.S. Treasuries, which rattled stock markets, could resume may also put a lid on stock prices, they said.

"While markets have stabilised..., the tone remains tenuous as investors continue to fear a further sell-off in rates," analysts at TD Securities said in a note.

The cautious mood weighed on the U.S. dollar, which has benefited in recent days from investor hopes that the United States will enjoy a faster economic recovery, and that the U.S. central bank will be more tolerant of higher bond yields.

The Australian dollar shined yet again, rising to US$0.7828 after stronger-than-expected economic growth in the fourth quarter fuelled hopes for a V-shaped recovery from the coronavirus pandemic.

Benchmark U.S. government bond yields dipped again for the third consecutive day as investors paused a recent sell-off ahead of a slew of U.S. economic data that will be released later this week. The yield on 10-year Treasury notes stood at 1.4085per cent, down from last week's high of 1.614per cent.

The U.S. stock market was roiled last week when benchmark yields spiked to a one-year high on investor bets that a strong U.S. economic rebound amid ultra-loose monetary conditions could fuel inflation.

U.S. Federal Reserve officials have said that inflation concerns are premature, however, and warned that rising yields could tighten financial conditions and constrain an economic recovery.

MSCI's broadest index of global stocks edged up by 0.05per cent.

Oil prices were mixed hitting a two-week low overnight on expectations that OPEC+ producers will ease supply curbs at their meeting later this week as economies start to recover from the coronavirus crisis.

Cryptocurrency bitcoin erased early losses and rose 0.62per cent to US$48,814. The digital asset is up 69per cent so far this year as it gains more acceptance in mainstream financial circles.