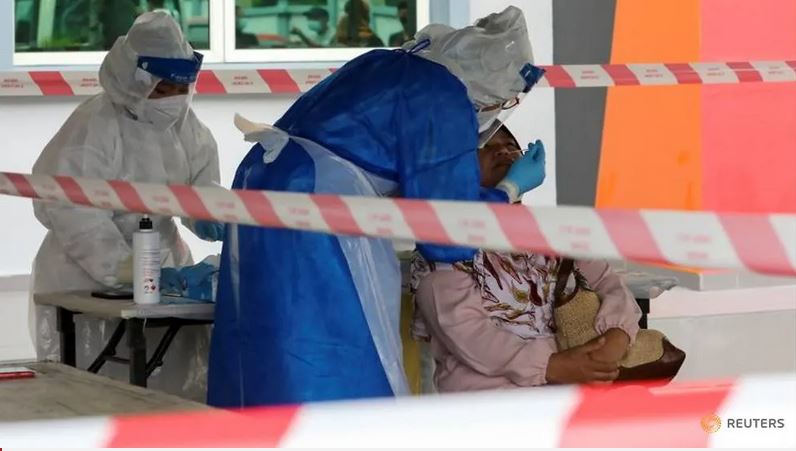 A medical worker collects a swab sample from a woman to be tested for COVID-19 in Shah Alam, Malaysia on Jan 7, 2021. (Photo: Reuters/Lim Huey Teng)
KUALA LUMPUR - Agencies

Malaysia's King Al-Sultan Abdullah on Tuesday (Jan 12) declared a state of emergency across the country to curb the spread of COVID-19, the palace said in a statement.

The emergency will last until Aug 1 or earlier depending on the state of coronavirus infections, palace comptroller Ahmad Fadil Shamsuddin said in the statement.

The decision was made after Sultan Abdullah met with Prime Minister Muhyiddin Yassin at the national palace on Monday.

"During a 45-minute face-to-face session starting at 5.30pm yesterday, Tan Sri Muhyiddin bin Yassin presented the results of the Cabinet Meeting on the proposed implementation of the proclamation of a state of emergency as a proactive measure to curb and address the positive COVID-19 daily cases that have continuously reached four figures since last December," the statement said.

The number of new daily infections in Malaysia hit a record high last week, breaching the 3,000 mark for the first time. Total coronavirus cases passed 138,000 on Monday, with 555 deaths.

The statement added that following the briefing from the Prime Minister, King Abdullah noted that the COVID-19 pandemic situation in the country was at "a very critical level" and that "there is a need to declare a proclamation of emergency based on clause (1) Article 150 of the Constitution".

Article 150 of the Constitution stipulates that the Malaysian king may issue a proclamation of emergency, upon the advice of the prime minister, if he is satisfied that a grave emergency exists whereby the security, economic life or public order is threatened.

The King's decision was also based on data showing how the healthcare system was under logistical constraints, the statement said.

"According to statistics, 15 COVID-19 hospitals recorded a COVID-19 (non-ICU) bed usage rate of over 70 per cent, the statement said.

The king also allowed a government proposal to set up an independent committee comprising government and opposition members of parliament (MPs), as well as health experts to manage the COVID-19 situation.

The palace's statement came a day after Mr Muhyiddin announced that five states - Penang, Selangor, Melaka, Johor and Sabah - and the federal territories of Kuala Lumpur, Putrajaya and Labuan would be placed under Movement Control Order (MCO) again for two weeks until Jan 26.

Interstate travel is banned across the country, while travel between districts is not allowed for the states under MCO, said Mr Muhyiddin.

However, King Abdullah then said that there was no need to declare a state of emergency in Malaysia at the time.